List of current and past events held by the Sri Lanka Association of New England event flyer information is posted for our members. Please come and support our events!

A fundraiser is organized by Sri Lanka Association of New England

To our Sri Lankan community members, families, and friends all over the world—Sri Lanka needs you now more than ever.

Sri Lanka is in crisis, and a majority of the people who call this country home are in imminent danger of starvation. The Sri Lankan people have been met with 13+ hour power cuts, dangerous shortages of much-needed food and medicine, and a scarcity of healthcare supplies needed for medical surgeries and procedures. The hardest hit are those living at or below the poverty line and whose day to day income has been severely affected by these power cuts and supply shortages. Many Sri Lankan families cannot afford basic food and medical necessities. 100% of the proceeds from this fundraiser will go towards local community organizations supporting people of ALL ethnic backgrounds in Sri Lanka. 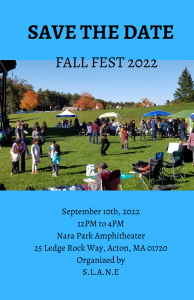 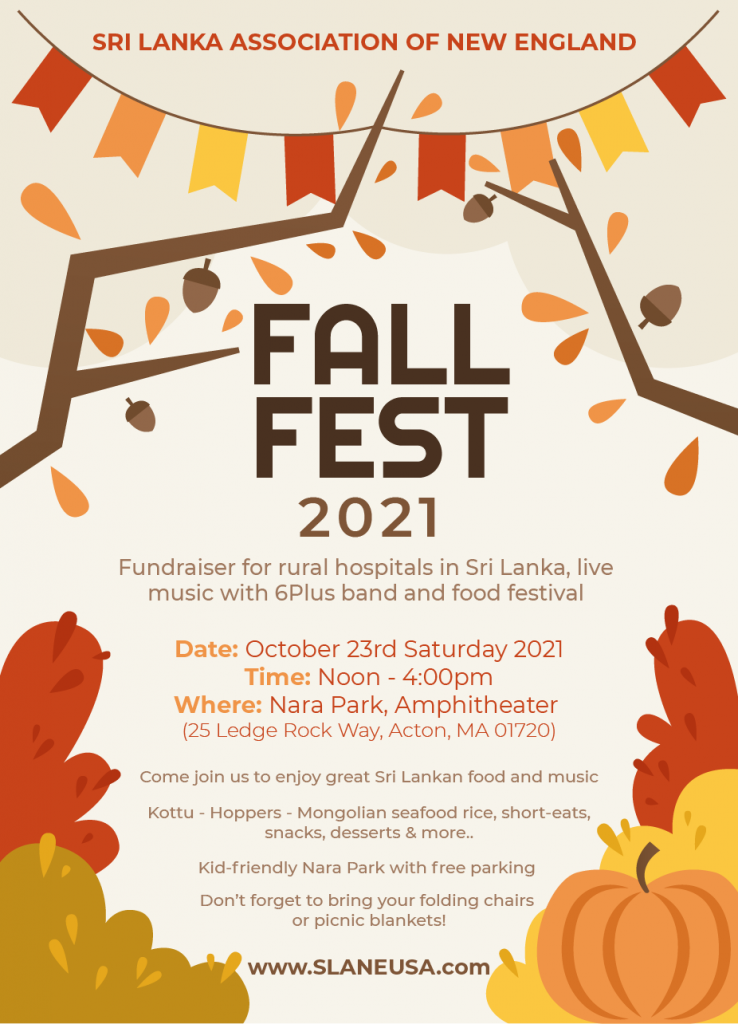 SLANE Winter Ball 2019 was held on February 8, 2020 at the DoubleTree Hilton in Westborough, MA. 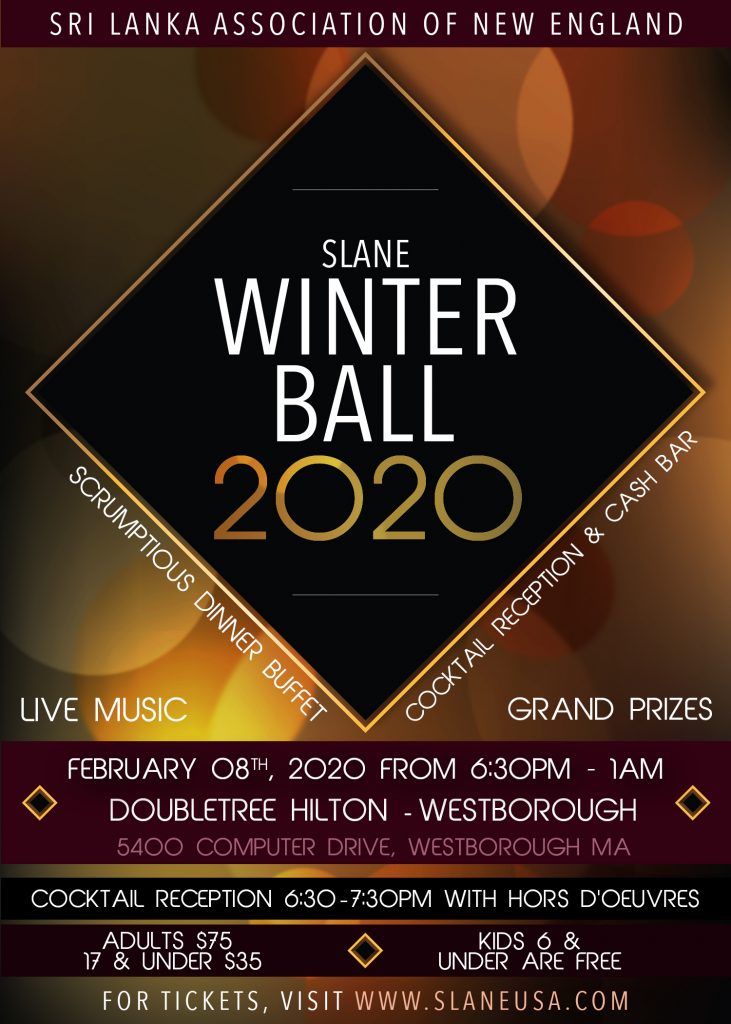 SLANE Summer Outing 2019 will be held on September 14, 2019 at the Auburndale Cove, Auburndale MA. 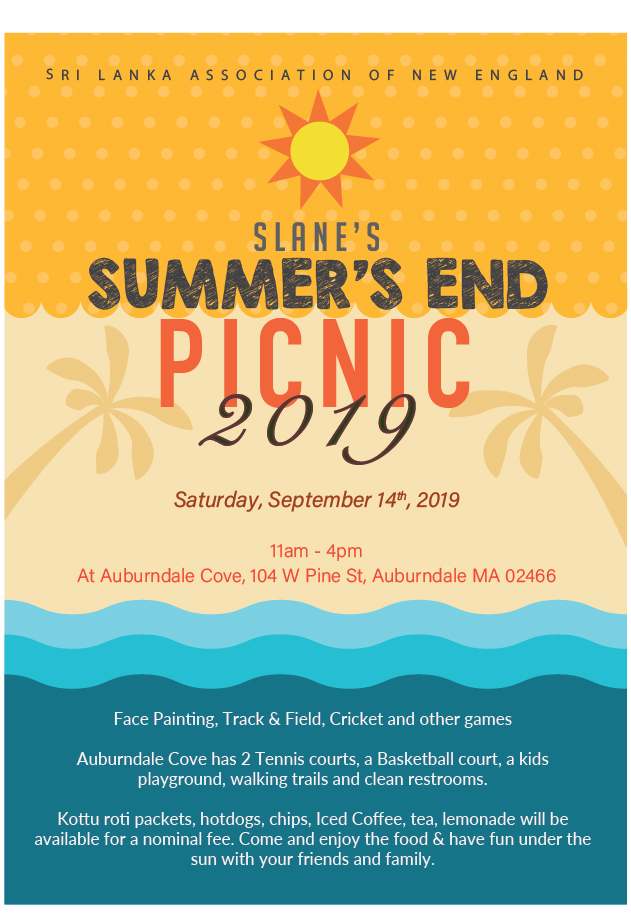 SLANE Winter Ball 2019 was held on February 9, 2019 at the DoubleTree Hilton in Westborough, MA. 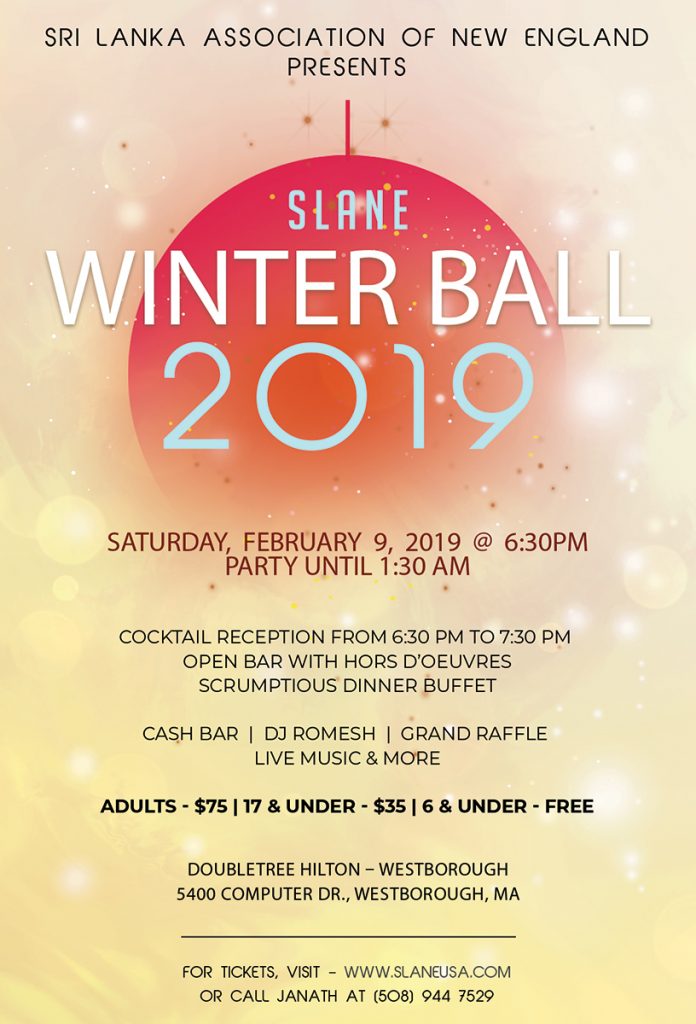 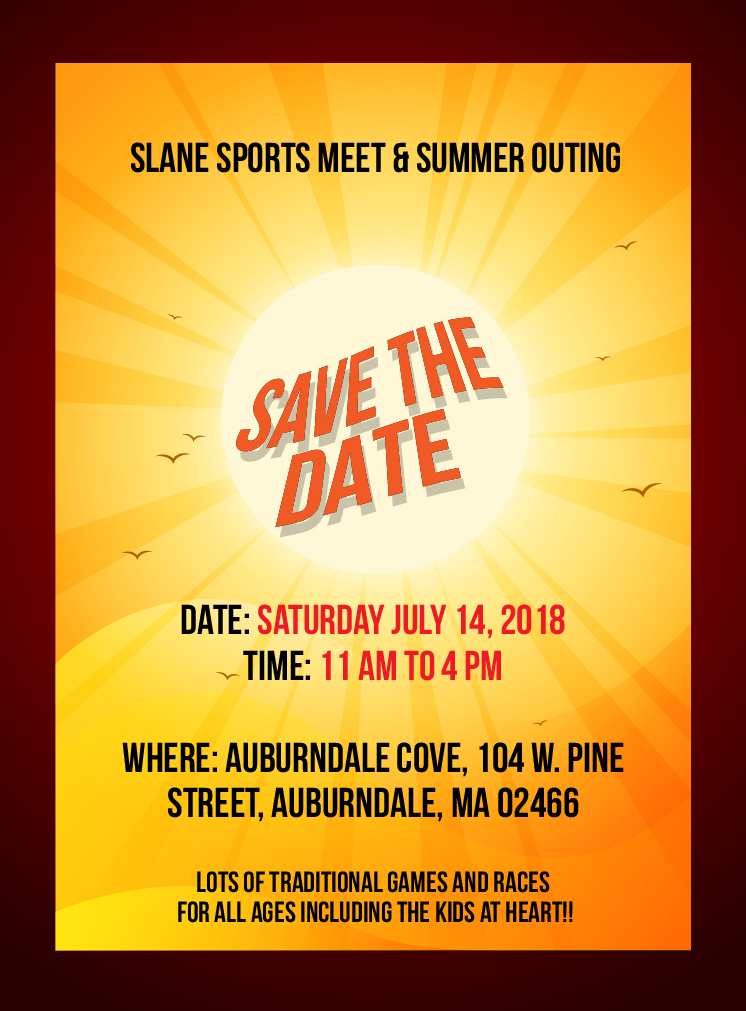 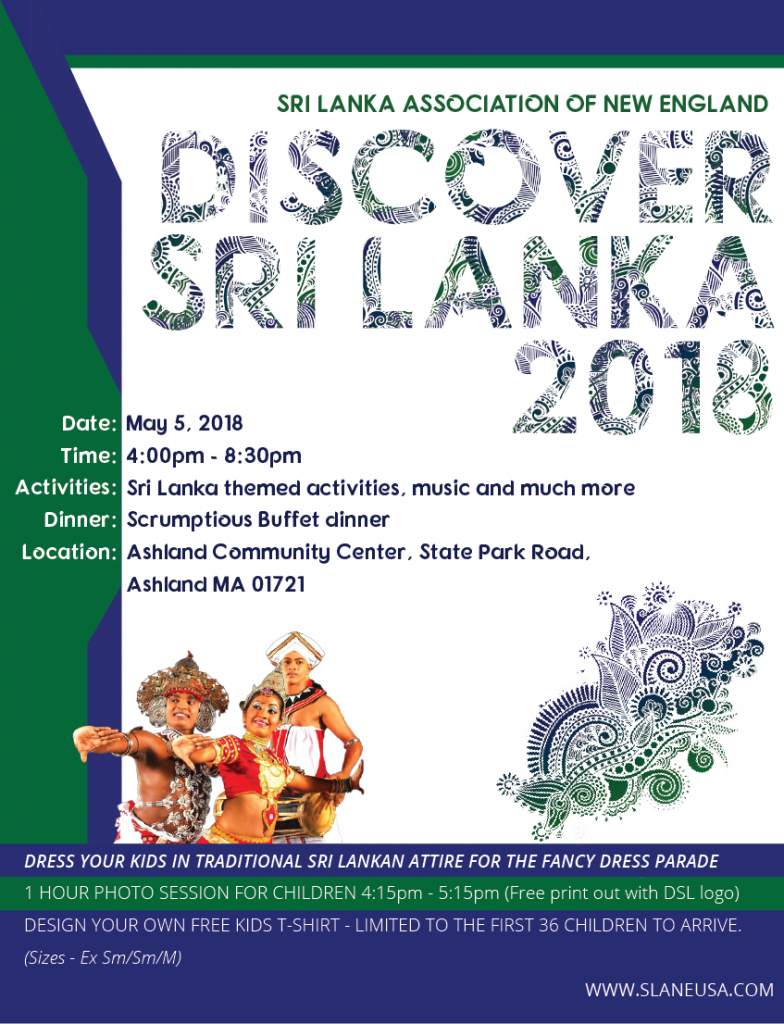 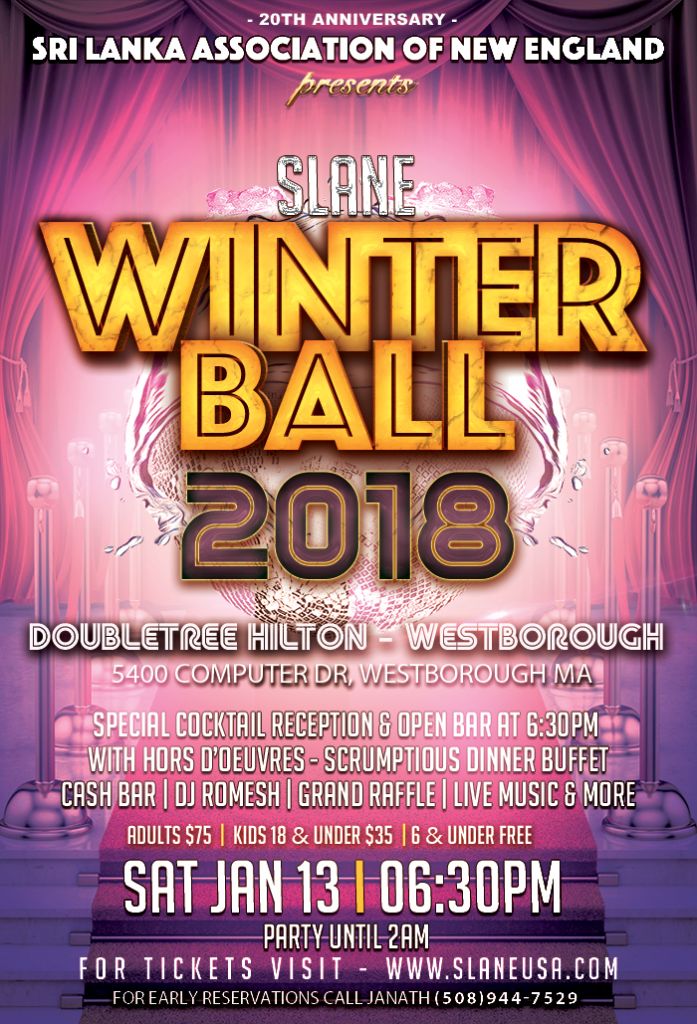 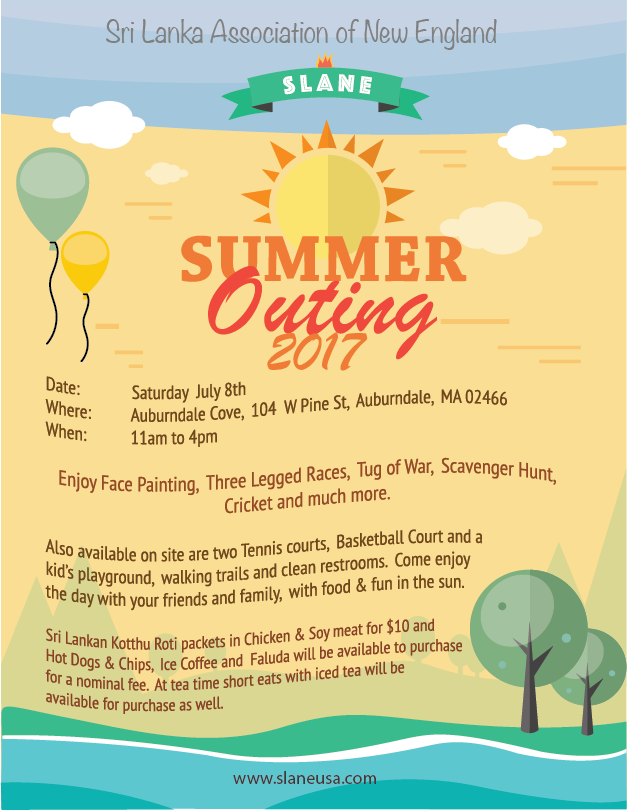 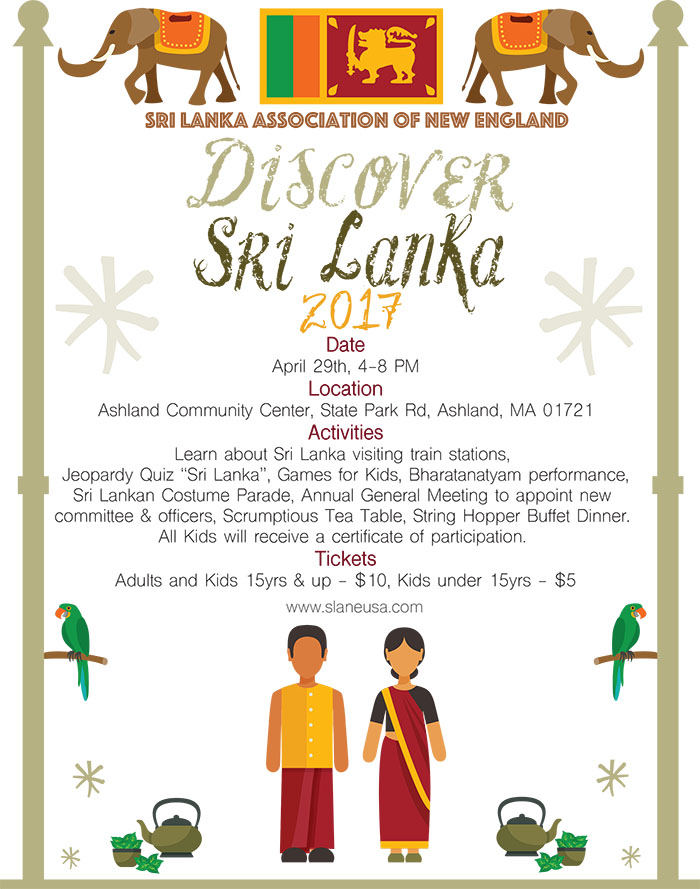 Do You Know Contest – Guide

1. Who is the 1st woman Prime Minister in Sri Lanka? Sirimavo Bandaranayake

2. Who is the current president of Sri Lanka? Maithripala Sirisena

3. Who is the 1st executive president of Sri Lanka? J.R. Jayawardana

6. What are the three nations that invaded Sri Lanka? Portuguese, Dutch & English

7. What was the former name of Sri Lanka? Ceylon

8. How many members are there in Sri Lankan parliament? 225

9. Who was the 1st Prime minister in Sri Lanka? Mr. D.S. Senanayaka

10. What is the official term of a Sri Lankan president? 6 yrs.

11. What is the capital of Sri Lanka? Sri Jayawardenapura-Kotte

12. Who was the last Governor-General (non-executive president) of Sri Lanka? William Gopallawa

14. What is the name of the Sri Lankan Ambassador in USA? Prasad Kariyawasam

15. Who is the Prime Minister of Sri Lanka? Ranil Wickramasinghe

16. Who is the present Leader of the Opposition? R. Sampanthan

17. Who is the present Speaker in the Parliament? Karu Jayasuriya

18. Who is the present US Ambassador in Sri Lanka? Atul Keshap

19. Who were the two former US presidents who visited Sri Lanka after Tsunami to support the rebuilding efforts? George H. Bush and Bill Clinton

20. Who is the last king of Sri Lanka? Sri Vikrama Rajasinha

22. Where is the last kingdom in Sri Lanka? Kandy

24. What are some of other names Sri Lanka is known as? Ceylon, Seelan, Serendib

26. Where is the historical record of Sri Lanka written? Mahawansaya

28. What was the 1st kingdom in Sri Lanka and who ruled it? Anuradhapura, king Pandukabhaya

30. Unmada Chitra who was imprisoned inside a tower “Ektam geya” had a son who became a king later on. What was his name? Pandukabhaya

31. What is the name of the king who declared “Not even a drop of water from the rain must flow into the ocean without being made useful to mankind”? King Parakramabahu I who built Parakrama Samudraya.

32. What is the name of the Yakshini queen who helped Prince Vijaya to become the king? Kuveni

33. What is the tallest waterfall in Sri Lanka? Bambarakanda

34. What is the capital of Sri Lanka? Sri Jayawardana pura – Kotte

35. What is the largest city in Sri Lanka? Colombo

36. Which continent does Sri Lanka belong to? Asia

37. Which sea is Sri Lanka in? Sri Lanka is a South Asian island in the Indian Ocean

40. What is the highest mountain in Sri Lanka? Pidurutalagala

43. What is the nearest country to Sri Lanka? India

45. What is the longest Bridge in Sri Lanka? Southern Expressway across the Benthara River. The bridge 695 meters in length, 17 meters in width

46. What is the longest Railway Tunnel in Sri Lanka? Singamale Tunnel – 559.75m. Between Hatton and Kotagala on “Colombo – Badulla” railway

47. What is the state in USA that has the largest Sri Lankan community? State of California

48. How many monsoon seasons are there in Sri Lanka? 2

49. Where is the new harbor located? Hambanthota

50. What is the 1st television channel in Sri Lanka? ITN

51. Who is the 1st first film actress of Sinhala cinema? Rukmanie Devi

52. What is the first Sri Lankan movie made in Sinhala language? Kadawunu Poronduwa

54. When did Jathika Rupavahini begin broadcasting? 1982

55. Name one Hollywood film that was filmed in Sri Lanka? “Bridge on the River Kwai”, “Indian Jones: Temple of the Doom”

58. Name a popular Bollywood actress who is from Sri Lanka. Jaquline Fernandez

59. Who was the Sri Lankan actress who acted in the popular TV sitcom in USA: ‘Outsource’? Thushari Jayasekera

61. What is the name of the Sri Lankan Traditional Drum Troupe in Boston? Pancha Thurya

62. What is the US Based media network covering Sri Lanka related news? Boston Lanka

64. What is the currency of Sri Lanka? Sri Lankan Rupee

65. In which month do Sri Lankans celebrate the “New Year”? April

67. What is the national tree in Sri Lanka? Ceylon ironwood (Naa)

68. What is the national flower in Sri Lanka? Blue Water Lily

70. What are the national languages of Sri Lanka? Sinhala and Tamil

71. What is the national sport of Sri Lanka? Volleyball

72. What is total population in Sri Lanka? About 20.5 million

73. What are the first three words of the National anthem of Sri Lanka? “Sri Lanka Matha”

74. What is the most sacred tree in Sri Lanka and where is it located? Jaya Sri Maha Bodhi in Anuradhapura

75. How many colors are there in the Sri Lankan flag? Four, Green Orange Maroon Yellow

76. Name the new (2nd) international airport in Sri Lanka, Where is it located? Mahinda Rajapakse International Air Port in Maththala

77. When did Sri Lanka experience Tsunami which caused a massive destruction? Dec.26th, 2004

80. In which province of Sri Lanka is the Yala National Park located? Southern province

81. Where is the Elephant Orphanage in Sri Lanka located? Pinnawala

82. What is the national food in Sri Lanka? Rice & Curry

86. When was the first cricket club was (named “Colombo Cricket Club”) formed? November 1832

87. Who was the captain of Sri Lankan cricket team when Sri Lanka won the world cup in 1996? Arjuna Ranathunga

88. Who was the Sri Lankan cricketer widely regarded as the greatest batsman in Sri Lanka who also won the prestigious “Wisden Cricketers of the Year” title in 2012? Kumar Sangakara

90. Who was the first Sri Lankan woman to win a medal in Olympics? Susanthika Jayasinghe

91. Who is the current Sri Lankan cricket captain? Angelo Mathews

92. Who was the Sri Lankan born Bestselling author of romance novels in the USA, who has been on the New York Times best-sellers list? Rosemary Rogers

93. Who was the world renowned Sri Lankan philosopher who worked as the curator of the Museum of Fine Arts in Boston? Ananda Coomaraswamy

94. Who is the Sri Lankan born venture capitalist billionaire in USA who was one of the few founding members of the Face Book: Chamath Palihapitiya

95. Who was the world famous British Science fiction writer, who also wrote the screen play of 2001: “A Space Odyssey” who lived in Sri Lanka and was a Chancellor of the Moratuwa University? Sir. Arthur C. Clark

96. Who wrote the National anthem of Sri Lanka? Ananda Samarakoon.

97. Students in Sri Lanka can receive a free education until they graduate from university. Who was the pioneer to establish that? Mr. C.W.W. Kannangara

99. What is the name of the American military officer, journalist, lawyer and the co-founder and first President of the Theosophical Society of Sri Lanka? Sir Henry Steel Olcott 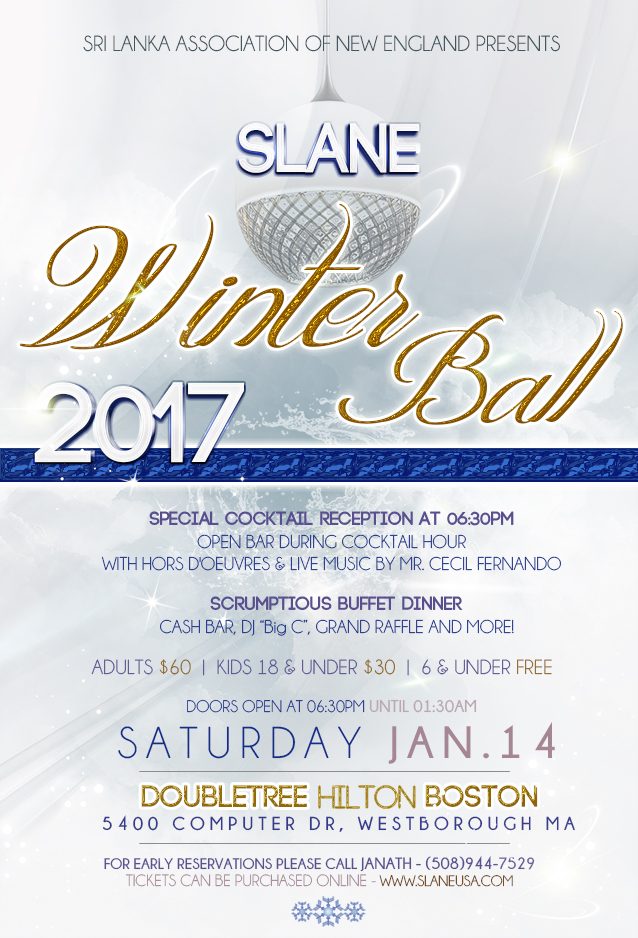 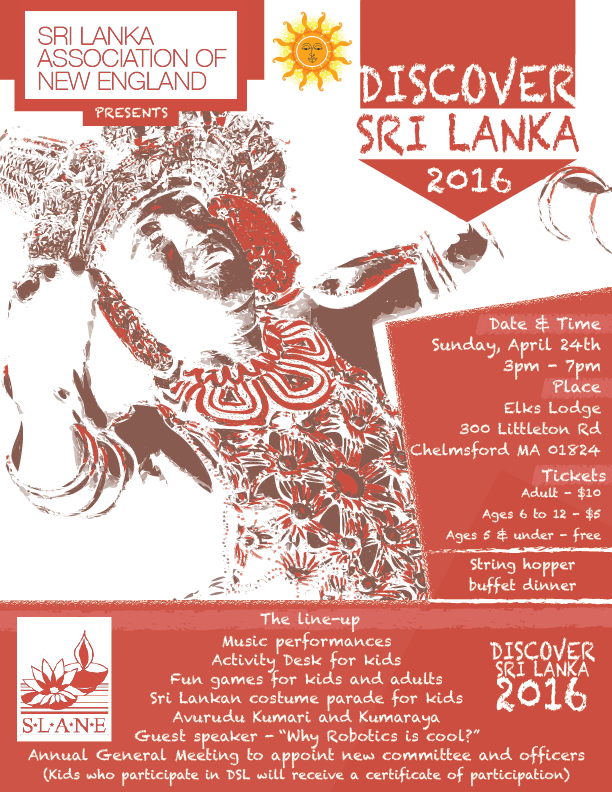 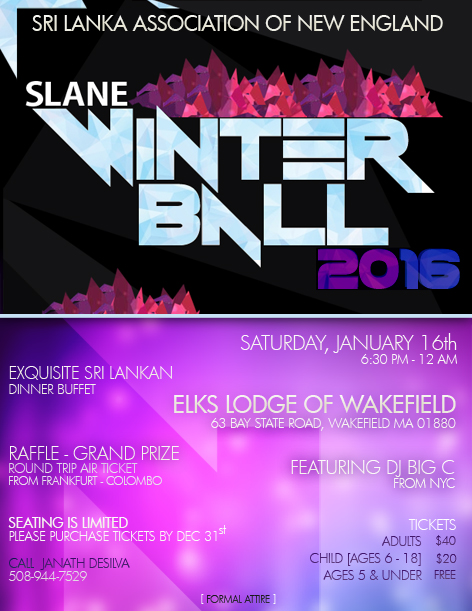 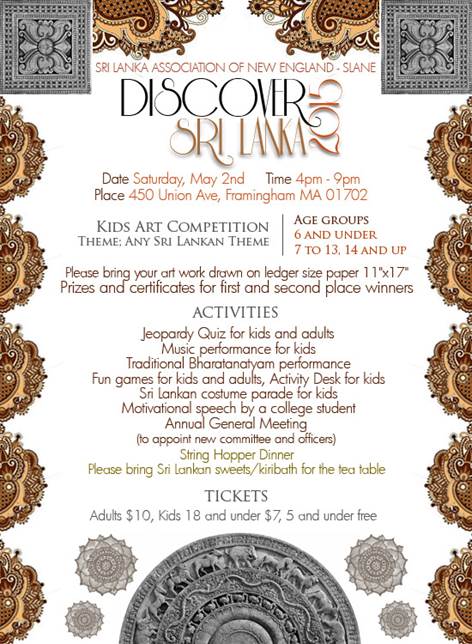 SLANE committee has been busy planning to bring Winter Ball 2015. See details in the attached flyer. Please save the date! Please note that the seating is limited to 160 people and you are advised to purchase tickets in advance and yes, we now accept credit cards for your convenience. Be advised that this WILL be an evening to remember and we will start on time. Get your dancing shoes ready and see you there! Let’s Party! 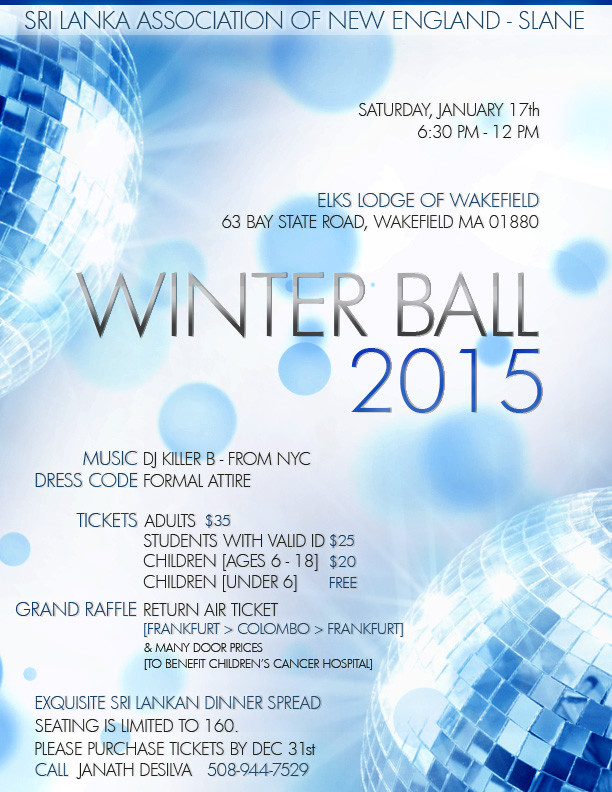 Our mission
To foster friendship, goodwill, peace and unity among all Sri Lankans in Massachusetts and neighboring states and to promote awareness and interests of Sri Lanka.
Sitemap
SLANE
Contact Us
Follow Us on
Copyright - SLANE USA
Contact Us

We're not around right now. But you can send us an email and we'll get back to you, asap.